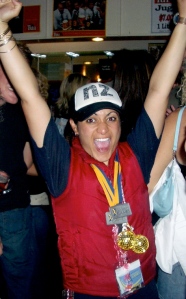 I am sad, confused and totally heart broken. I just found out that my dear friend Waitangi Macown passed away. We found each other through our love of rowing, eating, drinking and gossiping. We used to hang out all the time during especially my second and third year of rowing and there was never a dull moment. We were both “left” out of crews and tried to learn to row in the single at the same time. Being who we are, natural team people, we didn’t like the singles. So we decided to try out in a double. We had so much fun. Anyone who saw us get into a double laughed, the height difference was noticable. But we had so much fun rowing together. We were serious, we were on our own and we found strenght in each other and laughed about how we were at least “building character”. We did crap at the New Zealand National Champs, were cut in the repecharges, and we were devestated. I remember how we sat in our double after finishing the repecharge second to last, we sat out in the middle of Lake Ruataniwha, it was calm and cold and we sat there and cried. Wai was not a person who cried often but that time we sat there and cried. We sat there for a long time, not wanting to talk to anyone. After a while we started talking about our character building experience and soon we were laughing again.

Waitangi was with me the first moment I noticed Nik. She was mentioned in our wedding ceremony since she was the first person I said something about Nik to. We agreed that he had very nice arms. She was with me the night Nik and I became a couple, and I told her even before I told Nik that I loved him. I haven’t seen Wai in years now, not since she visited me in Stockholm one of the first years I lived here after leaving NZ, but we always stayed in contact. We had little chats about this and that on facebook. She was brilliant, smart and a great friend. She was really a character out of the ordinary, not a person you forget, but a person you wanted to know.

One thought on “My dear friend Waitangi”